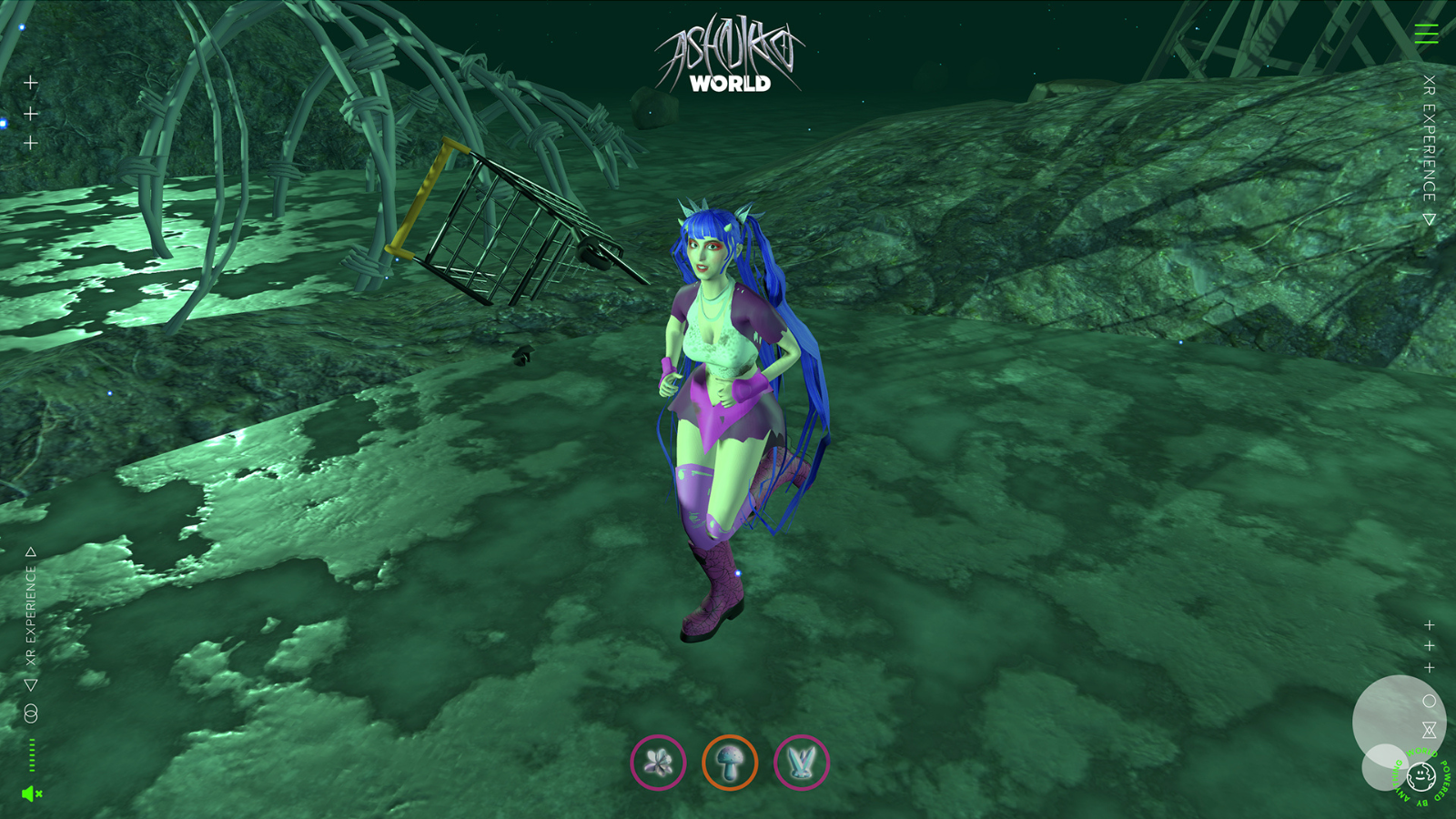 About the App
With the Ashnikko Experience, users now have the opportunity to accompany her on an exciting AR exploratory trip. As a controllable hi-res avatar, Ashnikko goes on a treasure hunt in a virtual 3D world. Players of the browser-based AR game can customize Ashnikko's outfit and subsequently explore an immersive world to collect magical objects and win exclusive content in multiple levels.

It’s a browser based Augmented Reality game optimised for mobile.

The world was developed by London-based tech startup Anything World, who crafted the digital experience in collaboration with Ashnikko, Warner Music Germany, Warner Music’s inhouse digital and creative tech team Firepit Technology and Parlophone Records, based on one of Ashnikko’s videos. Ashnikko herself recorded the situational audio commentary that guides players through the worlds, and the game also features her music.

About the technology
Anything World has developed an innovative deep tech platform, which empowers the creation of endless 3D worlds. Perfect when combined with musical experiences!

This new technology represents a genuine paradigm shift in how 3D experiences are created. Instead of commissioning CGI folks to model and animate a restrictive set of models, 3D assets of any kind can be requested from Anything World’s cloud platform at any time with natural behaviours already applied.

The Brick Lane, London-based majority female and non-binary startup is less than 2 years old and is already working with major brands including Ubisoft, Instagram, Facebook, and of course Warner Music.

London-based, American-born rapper and singer Ashnikko makes genre-bending hip-hop and electronic pop, marked by her hyper-stylized, anime- and video game-influenced persona. Born Ashton Nicole Casey in 1996 in Oak Ridge, North Carolina, Ashnikko grew up in Greensboro. She discovered rap around age 11. In her teens, she lived in both Estonia and Latvia, where her father was working. It was during this period that she began making her own music, influenced by artists like Nicki Minaj, Björk, M.I.A., Gwen Stefani, and Janis Joplin.

In 2017, she released her first EP „Sass Pancakes“, followed by her EP „Unlikeable“ (2018) and the EP „Hi It's Me“ (2019), which featured the song "Stupid" with Yung Baby Tate. The track and video went viral on several platforms, helping it reach #1 on both the Spotify Global Viral Charts and the Billboard “Bubbling Under Hot 100“ chart. The accompanying #StupidChallenge spawned 200m views on TikTok and over 3m videos to the song.

Most recently, Ashnikko released her debut mixtape "DEMIDEVIL" in January just in time for her 25th birthday, which reached the Top 20 on the charts in the UK and includes the collaboration "Cry" with future-pop pioneer Grimes, the single "Daisy" (Top 25 in the UK, 2x Gold) and her current single "Slumber Party" (feat. Princess Nokia). The official music video burst into the top 10 on YouTube's trending charts in the US upon its release in May.